It’s been hard for us all to adapt to this new normal. We miss our customers, many of whom have become friends, very much. Above anything, we hope you keep safe and well at what is a testing time for everyone.

Our shop is temporarily closed to the public, a decision that was taken a few days prior to the Prime Minister’s announcement last Monday. We are keeping well and while we are able, we wish to continue to make people smile with books. We have established a #PayItForward scheme, developed some free resources, and are also delighted to announce that thanks to your support, we were able to make a sizeable donation of books to Bassetlaw Foodbank.

We are available by phone (01777 948580) and email (hello@wonderlandbookshop.co.uk) for book recommendations and even a general chat if you’re feeling a bit lonely. Our book subscriptions make wonderful gifts and are still available for purchase; however please note that due to the ongoing situation, we will not begin dispatch of any new subscriptions until May. Our gift vouchers are available for purchase and we will ensure a long expiry date so that recipients have plenty of time to redeem them.

Our supplier is currently offering a home delivery service, so for the time being, we are still able to safely fulfil orders on new books. We can accept orders on books for both children and grown-ups and while schools are closed, we are able to offer a 20% discount off any books on a school reading list. Please be honest about this.

Thank you for your ongoing support. We look forward to a grand re-opening in the future!

We are so excited for World Book Day on 5th March To celebrate, we thought we would give you the opportunity to let your imaginations run wild with our fun competitions!

For details of our short story competition, please click here to download an entry form and rules. There are two age categories (6-10 and 11+), with a £10 voucher for the winner of each category and a £5 voucher for the runner-up.

We are also running a bookmark competition for our younger readers, open to those aged under 7. Please click here to download the entry form and rules. Once again, there is a £10 voucher up for grabs for our winner, with a £5 voucher for the runner-up.

Will you mark your books with fearsome dragons or bold princesses? Will your stories be a swashbuckling delight of mischief and mayhem? We can’t wait to see your entries! 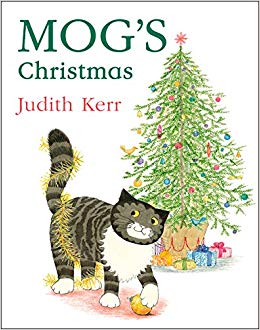 1 My Naughty Little Sister and Father Christmas by Dorothy Edwards

I used to love My Naughty Little Sister and these classic stories, beautifully illustrated by the magnificent Shirley Hughes have stood the test of time. My Naughty Little Sister and Father Christmas originally featured as a chapter within one of the books, but has now been published as a stand alone picture book for the first time. In this book, our long suffering narrator tells the story of when she goes to meet Father Christmas with her little sister who dares to bite him on the hand! With stunning illustrations, this is a gorgeous story to enjoy at Christmas, especially for those of us with our own naughty little sisters. This story also introduces us to the beloved dolly, Rosy-Primrose, for the first time.

2 Angel Mae and the Christmas Baby by Shirley Hughes

We seem to be running with a Shirley Hughes theme, but rest assured that it is entirely unintentional. It’s just so very easy to get lost in her beautiful artwork and Angel Mae and the Christmas Baby is no exception. Mae is so excited to be cast as Angel Gave-You (oh my heart, a mispronunciation of Gabriel) in the school nativity play, but her mother is heavily pregnant and the baby arrives at the same time as the school play. Mae takes to the stage and is delighted when her dad turns up to watch his pillowcase clad angel take her star turn. This story is part of the Trotter Street series.

Judith Kerr will always be one of my favourite authors and Mog will always be one of my favourite fictional cats. In this story, everyone is busy setting up for Christmas and poor Mog is terrified by the walking Christmas tree. “Once trees start walking about, anything might happen,” she thinks before dashing onto the roof of the house, refusing to come down even for supper. Everyone is sad but cheered up later when who should pop down the chimney but Mog? Happy Christmas Mog! 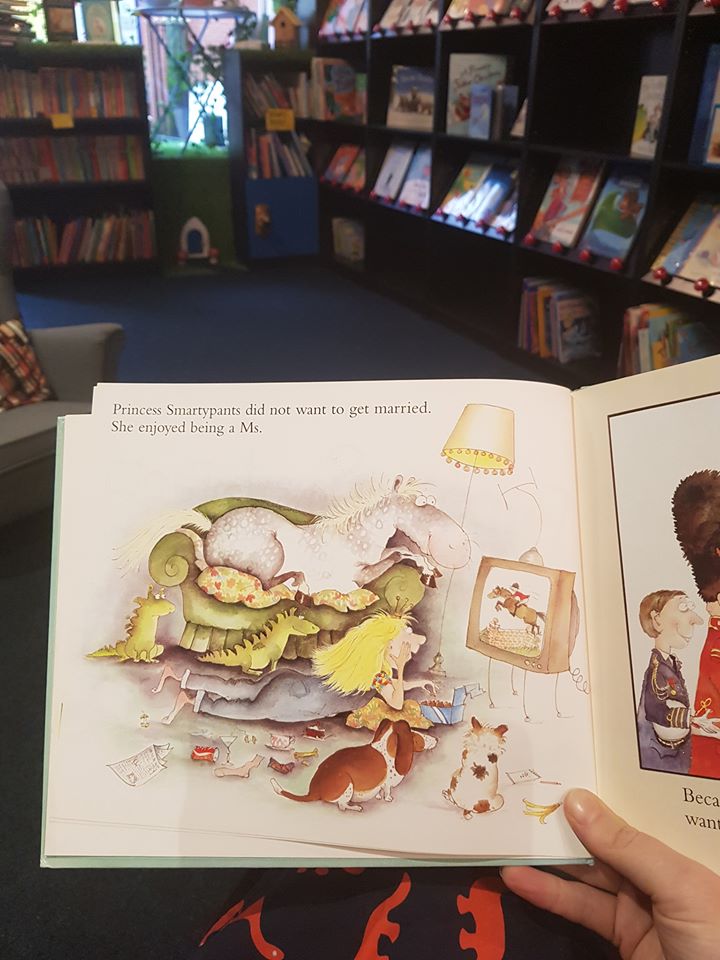 I adore books and so does my five year old daughter. My dinosaur loving  five year old also loves throwing herself into mud while pretending to be a superhero slaying dragons.

She also doesn’t have much time for princesses in fairytales.

Now, there’s nothing wrong with loving princesses. I loved princesses and I still do. But there are also some fantastic stories out there about princesses who refuse to conform to their traditional stereotypes. These princesses are smart and sassy and are quite happy not depending on their prince to save the day, thank you very much!

1. The Worst Princess by Anna Kemp and Sara Ogilvie

Brought to you by the creators of Dogs Don’t Do Ballet and Rhinos Don’t Eat Pancakes, this fabulous book about the mischief making Princess Sue is written entirely in rhyming couplets and was shortlisted for the Roald Dahl Funny Prize in 2012.  Princess Sue has been stuck in her tower for a hundred years, learning about princess behaviours and awaiting rescue. But when the Prince turns up, Sue realises that swishing her skirts around a tower isn’t really much fun. She befriends a Dragon and together they travel around making mischief for “royal twits and naughty knights.”  A fun introduction to smashing the patriarchy, this book is brilliantly entertaining.

I love Princess Smartypants. Originally published in 1986, this bold and brilliant story is THE feminist book of children’s literature. The story starts with Princess Smartypants’ outright refusal to get married. She declares that she wants to remain a “Ms.” And remain a “Ms” she does as various Princes arrive to woo her, but remain outsmarted by our heroine. The story reaches its finale as Prince Swashbuckle looks like he is going to get hitched to our Princess. However, the crisis is averted when she turns him into a gigantic warty toad with her kiss. We do like a non-traditional ending!

Published in 1980, the spirited Princess Elizabeth is set to marry Prince Ronald when horror upon horrors, he is kidnapped by a dragon who has destroyed the castle and burned all of Elizabeth’s clothes.  Undaunted, our clever Princess dresses herself in a paper bag and sets out to rescue Prince Ronald – who upon being rescued, is very unhappy with her not very princess appearance. This fantastic story shows that it’s great to use your brain and even more importantly, contains the message that you don’t need to settle for just anyone, but rather that it’s better to hold out for someone who appreciates you the way you are.

Have you met these feisty princesses? Or have you any other recommendations? Comment below and let us know! 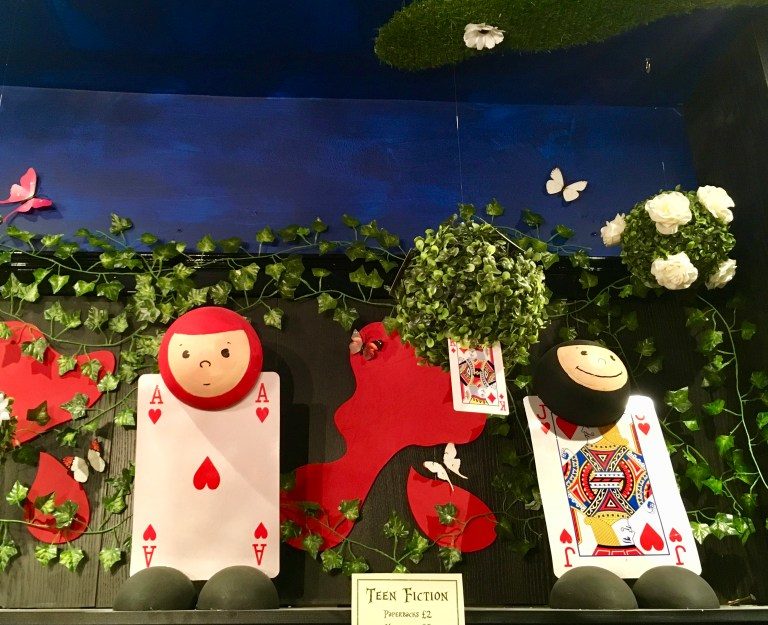 “The time has come,” the Walrus said, “to talk of many things…”

And it’s on that note, that I feel it’s time to talk about “Wonderland,” Retford’s beloved children’s bookshop, of which I’m fortunate enough to have adopted.

The Barrister in Wonderland opened for the first time on 4th May 2019 (Star Wars Day!). The little sister of The Barrister’s Book Chamber, Wonderland is enchanting, bringing smiles to the faces of all children who visit, both young and old. From the fairies who live underneath the window who always appear to be out whenever I knock on their door, to the tea party on the ceiling, one can’t fail to feel the sheer joy of books when surrounded by such magic.

But the question on everyone’s lips (well, the grown ups at least) is always the same. “WHY the Barrister?”

The answer is simple. There really IS a Barrister and she dreamed of opening a bookshop. She was responsible for bringing the joy of The Barrister’s Book Chamber to Retford, and as a big Alice in Wonderland fan, it was obvious that the children’s bookshop should become her very own Wonderland. The Barrister’s Book Chamber is now on a new adventure as it moves to Matlock, where it will be opening on 9th November, just a week after our own reopening.

I’m so grateful to The Barrister for trusting me with her baby and I hope you’ll join me on my journey down the rabbit hole.

We use cookies to ensure that we give you the best experience on our website. If you continue to use this site we will assume that you are happy with it.OkPrivacy policy